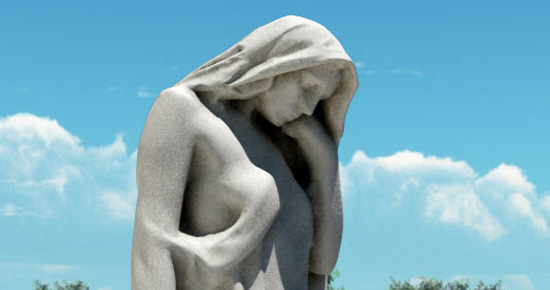 Dear son, I think of you every moment.

I miss you immensely.

The pain of your absence fills the very core of my being.

Today, like so many mothers who have lost their child, I remain inconsolable.

At the front of the monument, is one of its central figures – "Canada Bereft" - a woman, cloaked and hooded, facing eastward toward the new day. Her eyes are cast down and her chin is resting on her hand. This saddened figure represents Canada - a young nation mourning her fallen sons.

Canada lost 66,000 soldiers during the First World War. That is one out of every ten men. Of that number, 3,600 died during the Battle of Vimy Ridge. In France only, 11,285 were never found or had no proper burial. Their names are engraved on the base of the monument.

This figure was carved from a single, 30-tonne block of stone - the largest piece in the monument.