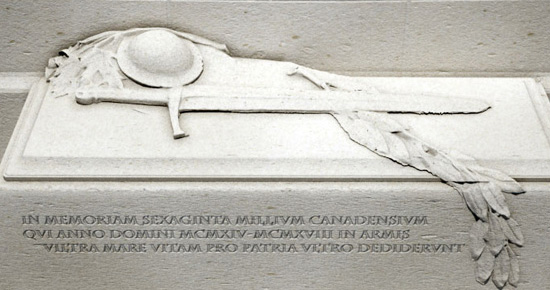 Below Canada Bereft is an empty tomb, draped in laurel branches and bearing a helmet which sits directly on the battlefield at the front of the monument.

It reinforces the sacrifice made in the name of the ideals for which Canadians had given their lives that are represented in the "Defender" groupings.

There is also a Tomb with a similar design now in Canada called The Tomb of the Unknown Soldier and it lies in front of the National War Memorial. It contains the remains of an unidentified Canadian soldier who had been buried near Vimy Ridge in France.